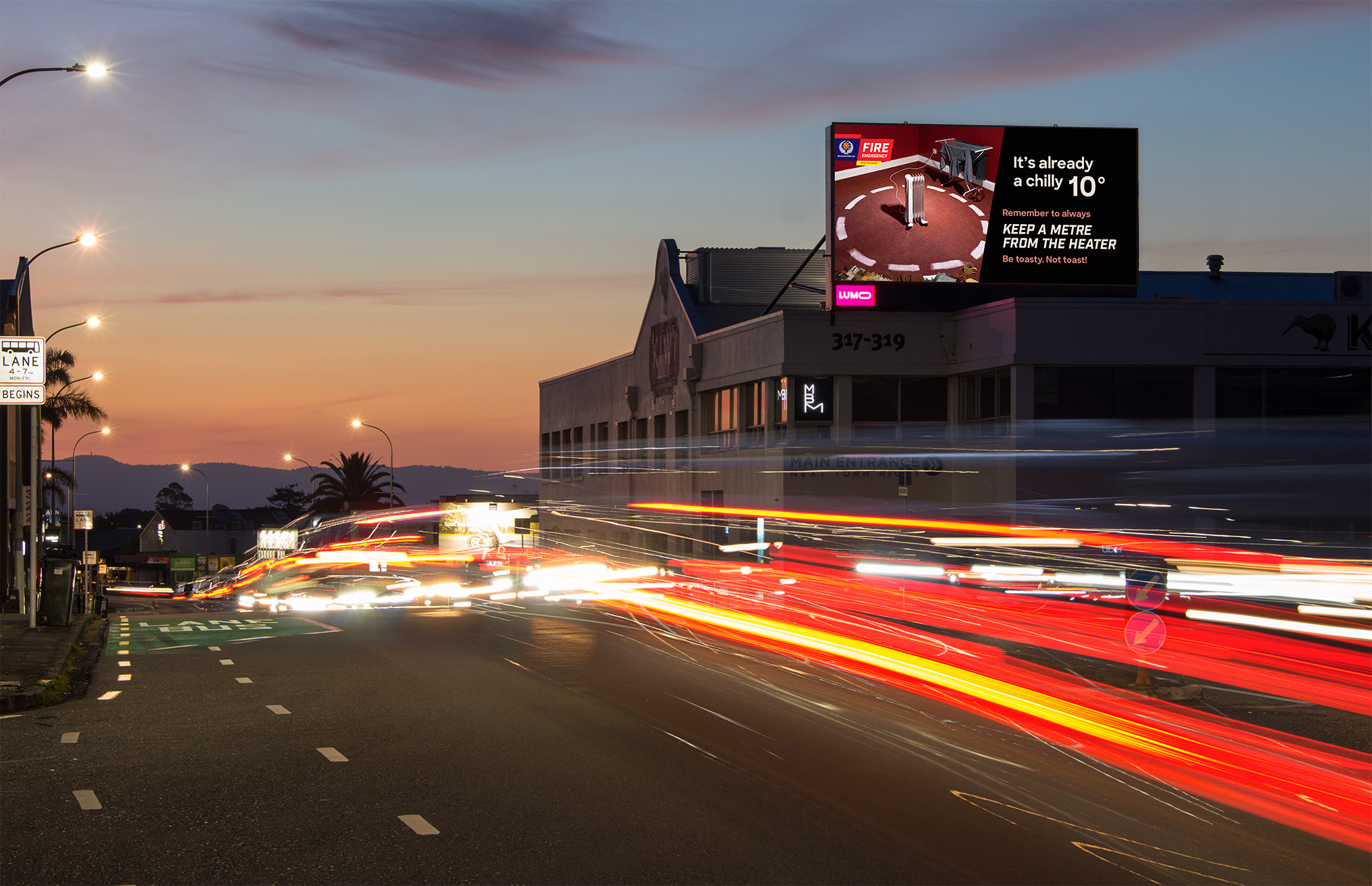 The ‘Keep a metre from the heater’ campaign uses live temperature readings to serve different dynamic DOOH creative executions encouraging Kiwis to comply with safer heater use behaviours as winter kicks into effect.

To ensure the campaign was delivered at optimal moments, Fire and Emergency leant on LUMO’s integration with Hivestack’s Ad Server technology to activate inventory during the drive home hours of 4pm and 8pm and only when the temperature dropped below 15 degrees.

The Hivestack Ad Server allows media owners to unlock the full potential of their digital inventory by optimising revenue across direct and programmatic channels. It makes it simple for direct sales teams to sell targeted, custom audiences more precisely and deliver impressions.

Todd O’Donoghue, Risk Reduction and Investigations Manager at Fire and Emergency New Zealand says this campaign comes at an important time to gain engagement for an important issue.

“As well as launching just in time for winter, this campaign also follows a sharp increase in the number of house fires last month. This makes it even more important than ever to connect with our broad target audience at the most relevant times to share some easy ways our communities can keep warm safely as temperatures plummet around the country.” Todd O’Donoghue, FENZ

The dynamic creative was produced by LUMO’s creative service arm, LUMO Labs, for the five main markets and is the first time a dynamic creative has been delivered on a NZ DOOH network using programmatic technologies.

Jack Plowright, GM of Programmatic at LUMO, says the campaign showcases the potential for dynamic programmatic DOOH in the market.

“By using these three inputs we’ve been able to demonstrate how platforms like Hivestack can deliver smarter investment for advertisers. The potential of targeted programmatic placements to make campaigns more impactful and tailored to audiences is significant, and we’re only just getting started. We’re looking forward to partnering with more innovative advertisers to demonstrate the benefits of this impactful medium on their businesses.” Jack Plowright, LUMO

Matt Bushby, Managing Director ANZ, SEA at Hivestack comments: “We are thrilled to be partnering with LUMO Digital in New Zealand to deliver this important campaign. The Hivestack Ad Server leverages the platform’s geo-temporal data to target custom audiences to purposefully activate DOOH screens based on audience concentration. With this level of precision, we can effectively ensure the right people see this campaign at the right time and do our bit to protect the safety of the general public here during winter.”